​​​The Midland Palette Club Art Center, now at 907 West Wadley, began in the very late 1920's when some neighbor ladies found others also interested in art. They took turns painting in each other's homes, garages or storerooms.

Mrs. Ralph Barron was President and her husband said that he would donate the lot at 604 North Colorado Street if his other lots in the area sold, which they did. The founding members raised $700 through the sales of cookies, aprons and magazines. They submitted their plans for a wooden building containing a craft room with a small kitchen and a bathroom to a builder. The women would finally be able to all paint at one time. They painted the building themselves. Maintenance was provided by their husbands as lawn mowing, plumbing and other mechanical needs arose.

With the boom of the 1980's, the downtown location became a valuable piece of property. The Palette Club members sold the property and used the proceeds to build a new, much larger brick building at 907 West Wadley, which also had plenty of parking spaces.
The rest is history! 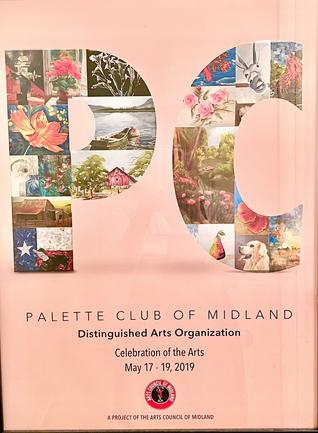